Cattleya Baudelaire (カトレア・ボードレール) is a character in the Violet Evergarden

series. Being a figurehead Auto Memories Doll who works for the CH Postal Company, Cattleya never stops being requested and she often takes on clients with love troubles. She works alongside Violet and has been close with Hodgins since before the company was established, joining as one of its initial employees.

Cattleya claims that she had terrible parents, which is why she ran away from home and ended up being taken in by Hodgins, where there were many moments of loneliness for her since she had no acquaintances. However, Cattleya eventually started working at the CH Postal Company, where she is the most popular Doll.

Cattleya is a woman with intense and passionate emotions. Although she possesses great strength, she is very feminine can be quite sensitive, and is constantly worrying about her appeal towards Hodgins. She is a very talented Doll who is experienced in love, which is why she is usually put in charge of lovesick clients. She treasures the concept of love, be it romantic, fraternal, platonic, sibling, or companion. She believes that love is necessary for living as it is like a symbol of happiness. However, she states that she doesn't fully understand romantic love and thinks love is uncertain, but can tell when it happens. Cattleya is shown to be a very warm, kind, and welcoming person, which is shown when she instantly warmed up to Violet and helped her with her work as a Doll. She is someone who has a realistic view on life, as she knows that words have different meanings depending on who hears them and that words don't simply tell people everything. She is understanding of people and can easily empathize with others.

Cattleya also has a cheerful, sassy and teasing side to her and is someone who expects favors to be repaid.[6] She is rather straightforward and vehement with Hodgins and enjoys teasing him about his given name, but she doesn't have any bad intentions in whatever she does. She also has a rivalry with Benedict and argues with him constantly. She is a prideful woman who dislikes being casually touched by others, and she also dislikes being alone since it makes her feel as if she has no charm. Although she is self-confident and is considered pompous, she doesn't believe herself to be one of those charismatic individuals who people are naturally gathered around.

Cattleya is a very mature woman who is able to take things seriously and calmly. She is very polite and soft-spoken, rarely seen raising her voice or being provoked by others. However, she is not afraid to voice her opinions or properly scold people when they make a mistake.[7] She is also very physically strong, which gives her the habit of trying to solve everything with force because she has confidence in her physical strength. Despite being a beautiful adult with a mature appeal, Cattleya can actually display a very childish and naïve personality, especially around Hodgins. She is noted to act like a child when things don't go the way she wants, and comes off as honest and blunt. She also likes being praised whenever she does something good. Despite that, she is a reliable person who loves supporting other people as well as when people come to her for advice or help. Cattleya claims that she has an older-sister kind of vibe to her and feels comfortable taking on that role.

Cattleya's design and character differs in the anime from how she is portrayed in the light novels.

According to the Light Novel: 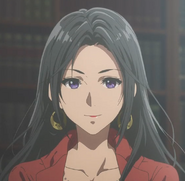 Add a photo to this gallery
Retrieved from "https://japaneseanime.fandom.com/wiki/Cattleya_Baudelaire?oldid=167094"
Community content is available under CC-BY-SA unless otherwise noted.